Citizen-driven placemaking (CDP) can be defined as residents of a community taking ownership of public urban space and repurposing it for their own benefit or need using guerrilla tactics. Examples of CDP can include a range of urban interventions from temporary to permanent installations and activities, among other ephemeral occupations.

CDP provides an opportunity for citizens to be activists in their community, creating meaningful places driven by their needs rather than government agencies or developers who may not understand the intrinsic needs of that group.

In this research, we begin to categorize types of CDP projects by examining characteristics such as motivation, practice, tactics, and outcomes. Through the examination of multiple case studies, we are able to summarize findings and learnings. 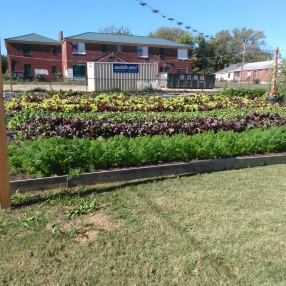 This research will be presented at the Ninth International Conference on Design Principles and Practices, March 12-14, 2015.

My proposal for a call of papers entitled “Recontextualizing Abandonment in Community” has been accepted to the Ciantec ’12 conference.

Neglect is everywhere and is most likely in your community. As you begin to pay attention, you may begin to see people take back space, redefining its purpose and suggesting a new function for a space. Perhaps neglected areas become local meeting spots. Perhaps they become function areas. In one instance, I saw community members turn an abandoned lot into a clothing exchange for good will. In this realization and fascination, I began to think about how graphic design could help be a catalyst for the community to take back abandoned areas. Could there be a way to encourage community, without force, to re-use their local neglected areas? Is it possible that graphic design could suggest new meanings around neglect that communities could respond to at a personally level, rather than the commercial level?

My response to these questions resulted in an investigation where I would insert provocative questions and statements in neglected areas, inspired by first-hand research from community members. In other words, I went out into different communities and talked to its citizens, discussing some issues and concerns surrounding neglected areas that directly affected them every day. My primary focus was to develop a strong narrative between written content and neglected spaces. Each phrase is carefully constructed, inspired by individuals, and intended to transform meaning in neglected areas. Perhaps as the narrative expands, definitions surrounding neglect would change over time and residents might begin to reclaim spaces.  This could be a way to revitalize areas without actually redesigning a specific space. Disguised as city street signs, chalk drawings, and boarded up blackboards, the narrative is inserted within the physical design of the urban landscape. They are not presented, but instead, discovered. Each piece recontextualizes a particular neglected location by manipulating meanings, building curiosity, and provoking interest.

“CIANTEC, is an inter and transdiciplinary congress, focusing on art, new technology and communication. Ever since 2007 different institutions have hosted it itinerantly. Up to 2010 the encounter was taking place annually; from its fifth issue it ensues biennially.

The event features distinctively among the knowledge areas it comprehends as well as in the research and diffusion areas. Its interdisciplinarity  is clearly identifiable on the theme of each issue, for it cover and relates the subjects and the researches every and each one of the participant institution.”

The conference will be hosted by Inhotim, Brazil. The area, according to its website, is “known nowadays as the major center of contemporary art and botanic. With more than 230 acres and a vast area of open-air masterpieces, and even in temporary galleries and site specifics, Inhotim will also host CIANTEC.