Georgia State has been invited to participate in the art exhibition, Aqua Art Miami. Aqua “features innovative galleries from the west coast, greater USA and abroad, with an emphasis on emerging and early mid-career artists,” according to the website. I will have an installation piece featured in the show this December called THAT WAS MY IDEA. The installation will be in a window frame at the show.

“That was my idea” debuted yesterday, December 1 at Aqua Art Miami and will stay on display through Sunday, December 4. The piece can be found in Art Basel suite 212 with the GSU exhibition room for 3rd year art graduates. For more information regarding scheduling, directions, and other exhibitors, check the website.

Below are some photographs of the completed installation. 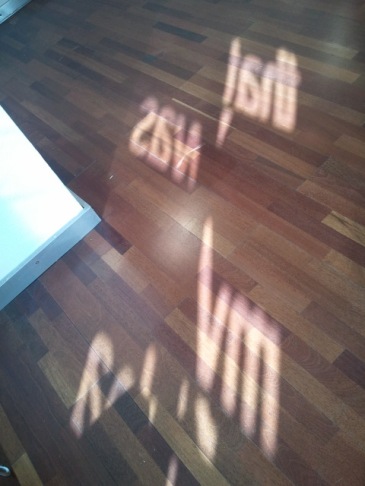 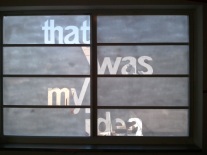 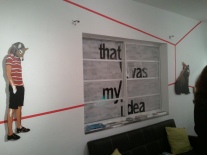 Artist Statement:
In attempt to create interesting contradictions, I’ve worked with highly public spaces to display private thoughts and ideas. THAT WAS MY IDEA is one of many slogans written for this project that communicate ideas, and emotions originated from private reflection. Inspired by a project I conducted in 2009, the slogans are written from an introspective place, bringing to light the many countless thoughts that run through our brains on a daily basis. These thoughts could be as simple as remembering to call someone, CALL YOUR MOTHER; or as common as daily reminders, DON’T BE LATE. Most of the original slogans were declarative thoughts, suggesting commands that passerbyers might see and then therefore create a new series of thoughts in the viewer.

THAT WAS MY IDEA, in the same manner, originates from internal thoughts Have you ever passed by something that made you reminisce about an idea that you had prior and you felt frustrated by it? This slogan represents that feeling… that frustration. The contradiction of placing this slogan in a largely public place suggests that many may share these same thoughts. It is a way to publicize ideas in an anonymous manner.

The public sites for this project are very important because 1. They become a medium between private thought and public announcement and 2. Each site varies and therefore the work also becomes site inspired. Sites can include window frames, rooftops, sides of buildings, and the like. Many of the structures that interest me include gridded surfaces where the type can site in and around square patterns. In most cases, the type runs through the frames and uses the natural infrastructure as portions of the lettering.

The typography chosen for this project is universal and non-descriptive. The intention here is to steer away from type that may influence meaning. In other words, type selections should not have expressive meaning and should only draw more thinking to passerbyers in an unobtrusive manner.